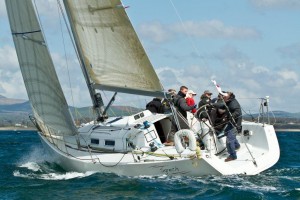 The race started in 10-12 knots southerly wind. The tide was north going for another two hours. The fleet set off beating towards the North and South Stacks, rock hopping to get out of the tide. As the fleet left the shore for the last time heading out into the foul tide, Mojito, Ulula and Diva took to the front. Lula Belle took another few tacks along the coast and also looked in a strong position leaving the Welsh coast.

At this stage the fleet was very well bunched. The leg to the virtual waypoint was a short leg / long leg beat. The fleet stayed in very close contact with little in the way of place changes. Sgrech was behind the leading three approaching the virtual waypoint.

Rounding the virtual waypoint the next leg was a very tight reach. This suited the J boats - Sgrech, Mojito and Jetstream. Approaching Dublin bay the fleet was still well bunched but the winds were becoming very fickle. The tide was north going, suiting the bigger boats at the front. However, the wind filled in again from the rear bringing with in the smaller boats as they bunched approaching the finish.

Sgrech managed to pass the three leading boats on the water between the Kish Lighthouse and the finish to take line honours. However, this was not good enough to take the overall race win that went to a non ISORA boat Easi Tiger. Sgrech took ISORA race win with Mojito and Jetstream taking the second and third places overall.

The Class 1 win went to Sgrech while Jetstream took Class 2. The Silver Class was won by  Polished Manx. After 6 races the leader for the series in Mojito with Polished Manx leading the Silver Fleet

The Lyver Race was recorded using the Yellowbrick trackers and can be followed on the Liverpool yacht Club website - www.lyc.org.

The ISORA next race will be the Night Race run in conjunction with the Royal Alfred Yacht Club on Friday Evening, 26th July Starting and finishing in Dun Laoghaire. This is normally a well supported race. The first Pwllheli day race takes place on the following day 27th July.

The Dun Laoghaire regatta takes place next Thursday to Sunday 11th -14th July. The innovative Coastal series class has been included. This consists of long day races similar to our ISORA Day Races. There are 15 boats entered in the class to date. I know those boats will be rewarded with great sailing in open uncluttered waters!!!!