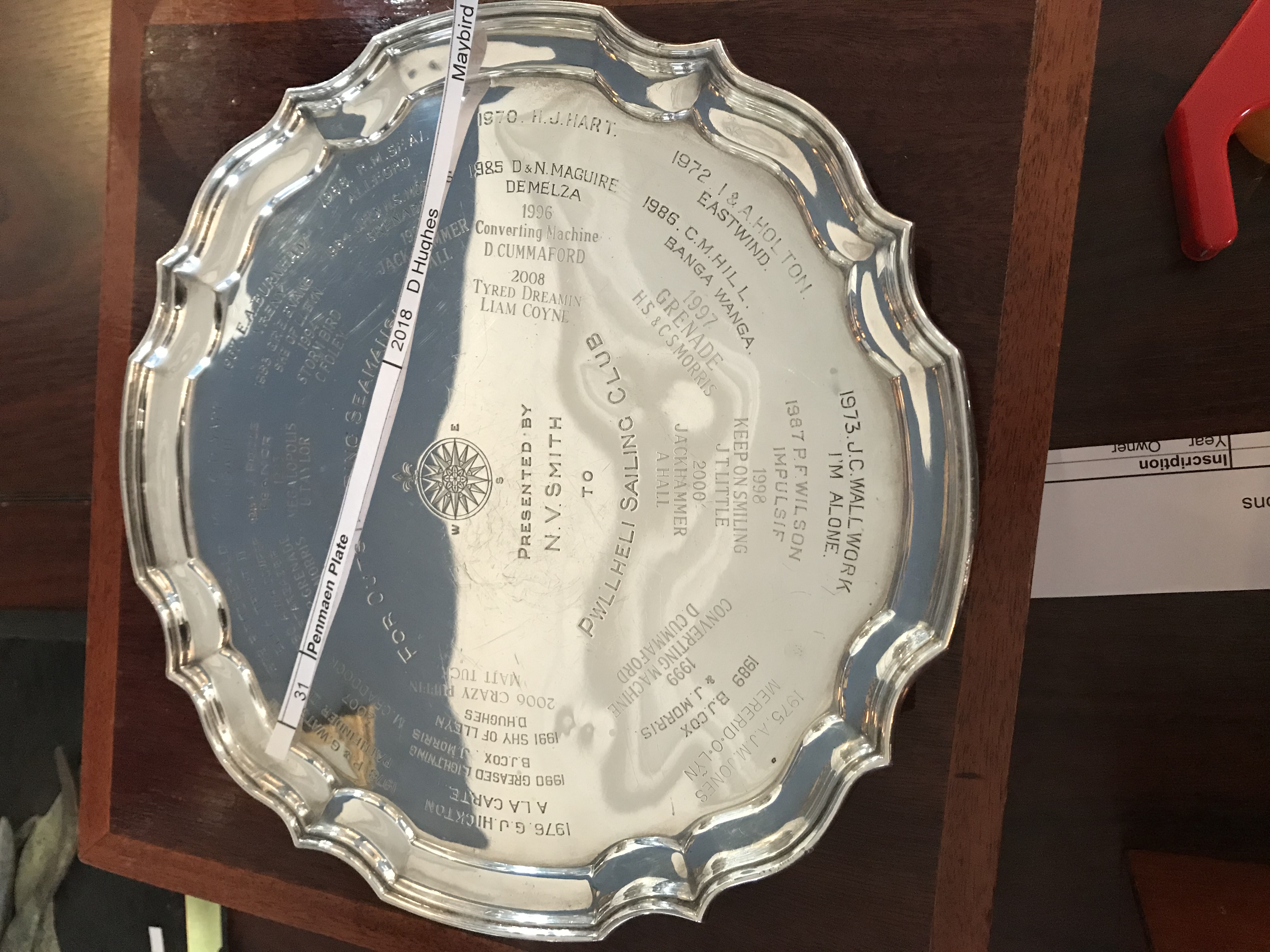 The ISORA “Penmaen Plate” is a a trophy dedicated to a past Chairman of ISORA, Anthony Jones, and award to a  member that has most exhibited the “Spirit of ISORA”.

The trophy was originally presented to Pwllheli Sailing Club by N V Smith as an annual award for outstanding seamanshipand. However, the trophy was rededicated to past Chairman of ISORA, Anthony Jones, of Penmaen Pwllheli and in recent years has been awarded by ISORA to persons who have best displayed the spirit of ISORA

Recent winners are as follows (but see the link below for a full list of winners dating back to 1966): 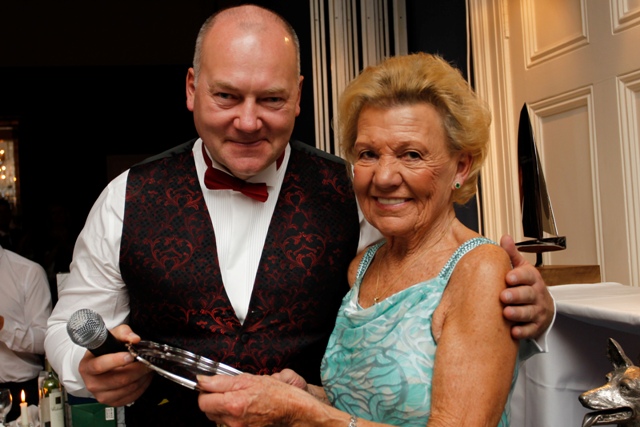 Read the full article here in Afloat by WM Nixon

The Irish Sea Offshore Racing Association has a long and varied history extending back to the 1930s writes W M Nixon. For although ISORA, as we know it today, was inaugurated as recently as 1972, it is directly descended from the North West Offshore Association, which in turn emerged from the Mersey & North Wales Joint Offshore Committee. That, in turn, was spun out of club groupings which ran events like Tranmere SC’s annual Midnight Race to the Isle of Man from the Mersey, and cross-channel races – traditionally at Whitsun – from Dun Laoghaire to Holyhead or the Isle of Man run by the Irish Cruising Club.

As the new organisations developed from the old, they either inherited existing trophies for long-established events, or else new trophies were donated. Either way, over the years it has been vitally important that the inscriptions on the trophies are kept up-to-date for the annual prize-giving, because it is surprising how often written records can go missing, and so the trophies themselves become integral to knowledge of the history of the Association.

Thus it came about that at the recent ISORA 2018 Prize Giving in the National Yacht Club, Darryl Hughes – owner, skipper and restorer of the immaculate and keenly-sailed 1937 Tyrrell 43ft gaff ketch Maybird – was surprised to be called up to the stage to receive ISORA’s Penmaen Plate. For although Maybird had gallantly participated in several ISORA events – including the historic Midnight Race – she and her enthusiastic crew had not knowingly won anything under even the most benign imaginable corrected time system, and for good measure, their season was to include setting the longest time ever for a finisher in the Round Ireland Race.

But all became clear when ISORA Chairman Peter Ryan announced that the Penmaen Plate goes to the boat which best expresses the “true spirit of ISORA”. And he added that if you asked the officers and committee to define the spirit of ISORA, they couldn’t do it, but they knew it when they saw it, and they saw it very clearly indeed in the Maybird approach.

However, when you’re dealing with a bunch of canny Dubliners and shrewd Welshmen and hard-headed north of England folk, you don’t get owt for nowt, and Darryl Hughes had no sooner got used to the idea of this unexpected but very welcome honour than Stephen Tudor, ISORA’s Pwllheli-based Hon Sec, suggested that as he’d have the trophy for the winter, they’d be much obliged if he could record the names of all the winners over the years, as they seem to have gone missing in ISORA records, and the Penmaen Plate had been used for several purposes since it first became part of the Irish Sea and St George’s Channel sailing in 1966.

It sounds perfectly simple. But to begin with, nowhere on the trophy does it even say that this is the Penmaen Plate. Originally, it was an anonymous silver salver presented by N V Smith in 1965 to Pwllheli Sailing Club for an annual award for outstanding seamanship, and the early listings reflect this. But in due course it became part of the ISORA lineup, and it was particularly associated with one of the great men of Pwllheli and ISORA sailing, Anthony Jones of the Nich 30 Mererid o Lyn.

The word “convivial” is inadequate to describe Squire Jones. He was a one-man 24-hour party, with the pre- and post-race gatherings at his hospitable manor house of Penmaen in the heart of Pwllheli a long-established part of the ISORA way of life. And when Pwllheli finally acquired its marina in 1993, the Squire was particularly well pleased, with the celebrations that night at Penmaen becoming epic regardless of the fact that we’d all to race back to Howth next day in what was also an RORC Race.

Squire Jones’s convivial abode – Penmaen House in Pwllheli was the setting for some of ISORA’s greatest parties.

Such days are now long gone, but they were great days while they lasted. When Anthony Jones died, the salver became the Penmaen Plate in honour of his memory, and in recent years instead of being for a specific race or set of results, it for this intangible yet very real “Spirit of ISORA”.

The names of the winners from the racing times, and the awardees under the new regime, will ring bells a-plenty for old Irish Sea racing hands. If only Cass Smullen were still with us to give us the full lowdown on the stories of all these people and their boats…….

From the days when it was still a racing award, we note that the first Irish winner in 1978 was sailmaker Philip Watson, who raced with business partner Kieran Jameson in the J/24 Pathfinder II in the days before the Fastnet storm disaster of 1979 - with its subsequent increase in stability requirements - made J/24s ineligible for offshore races.

Then in 1985 Neville Maguire with the Club Shamrock Demelza won the Penmaen Plate – the year before, he’d been ISORA overall champion, and had also done well in the Round Ireland race, while his son Gordon became the 1984 Irish National Windsurfing Champion. Busy family, the Maguires….

In 2008 when it was still purely for racing in ISORA, the name of Liam Coyne comes up for the first time. But when it appears again in 2014, it’s the Penmaen Plate in its modern guise, and he and Brian Flahive are awarded it for their storming performance in the gale-wracked Sevenstar Round Britain & Ireland Race with the First 36.7 Lula Belle.

Thus you can be awarded the Penmaen Plate for a diversity of achievements. But as Peter Ryan says, you know the spirit of ISORA when you see it, and Maybird is a worthy winner.