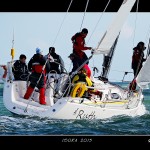 On Friday 26th July 16 boats from an entry list of 22 boats came to the start line at Pier mark in Dun Laoghaire. Seletion of the course for the race was difficult due to the light winds that had been plaguing the area for the previous evenings. However, when the Met Eireann forecast was issued at 18.00 before the briefing, it indicated that the good winds that had been blowing all day would not decrease, and may even increase.

On this basis the Sailing Committee elected to race the course as per the sailing instructions: Start – Muglins – North India – Muglins – Finish (34 miles). Another factor affecting the choice of course was the strong tides that were due to turn north as the fleet headed south from the start. Again it was felt that this would encourage close shore tacking in the good winds. Well one out of two is not bad!!!

The ISORA Chairman had asked those boats taking part to also take part in a trial use of the Predict Wind trackers – an iPhone & smartphone app. Nine boats obliged and the race can be viewed by downloading the app. More on this later.

NYC Vice Commodore, Larry Power sent the fleet towards the Muglins at 20.05 in fresh southerly winds 15-18k. From the start it was obvious that the race was going to become an “inside” / “outside” race depending the line boats took against the strong tide. From the start most of the boats chose the “outside” line to Muglins but a few including “Ruth” and “Jedi” selected to take the “inside” line. For this short leg any advantage was not clear.

“Tsunami” led the fleet around the Muglins . It was not until immediately after the Muglins that the benefits of the initial tracks took affect. “Tsunami” and most of the fleet got hammered in the overfalls behind Dalkey Island. Those boats that tok the inside track and tacked south immediately behind the island avoided the “slap bang wallop”.

While the fleet were in Killiney Bay, the first signs of an inaccurate forecast became apparent as the wind started to drop and back south westerly. The making tack of the beat to North India was the “outside” track. Those going “inside” risked the possible wind shadow under Bray Head. The two J boats with “Adelie” and “Lula Belle” too this risk. Again, when they came out from under Bray Head to rejoin the fleet, any advantages of the decision was again not obvious.

But then came Greystones!!!! The winds became even lighter and at times there was no progress against the strong tide. This can be seen on the tracker – it looks like a bomb went off in the middle of the fleet and sent boats scattering in all directions!!! By the time the first boats reached North India just after 02.00 in the morning the lead bunch consisted of “Adelie”, “Jedi”, ”Lula Belle”, “Ruth”, “Tsunami” and “First of September” Many of these boats round within seconds of each other – a spectacular sight (fright) of many boats rounding a navigation mark at night in close proximity in strong tides.

Despite the battle with the winds and tide those boats taking part in the race were treated with a night of beautiful clear and warm weather conditions and a relatively flat sea. There is no more spectacular sailing course for a night race than that well lit stretch from Dun Laoghaire to Wicklow. Also the stunning views of the Muglins, Dalkey Island and that stretch in the strong early morning sun – this is paradise racing!!!

As it was to be, the tide now turned south so the fleet had a run back to Muglins again against a strong tide!!!. Again the “inside” / “outside” divide was critical. Going inside towards Greystones and under Bray Head was not attractive. However, “Fortune favours the brave”!!!! “Ruth”, “Jedi”, “Adelie” and “Lulla Belle” headed on a reach for Kilcoole beach and possible oblivion. Those boats with symmetric kites felt that heading directly for the Muglins would be better??? For long period of the doldrums around Greystones and Bray head the “four musketeers” could be seen struggling to make progress and at times positively stopped. The outside boats felt the fortune was theirs!!!

As the south going tide increased in strength and the "four musketeers" became two, "Adelie" and "Lula Belle" electing to go out, their risk started to pay off – “Ruth” and “Jedi” shot out the back of Bray Head and disappeared into Killiney Bay, close to the shore and out of the tide. From where the main bunch of the fleet were located, the two boats appeared to be side by side in close contact racing.

By 05.00 the winds started to build again and the remainder of the fleet got in procession along the rhumb line, rounding Muglins and towards the finish.

The finish line was manned by Ian Meldon of the NYC. “Ruth” and Jedi” crossed the line first followed by “Adelie”, Tsunami”, “Lula Belle” and “First of September”.

After the Night Race and the Day Race run in Pwllheli, the placings for the title of "ISORA lynx metmAsts Offshore Champion" is hotting up. “Mojito” holds a very narrow lead but “Ruth”, defending Champion “Sgrech”, “Lula Belle” and “Polished Manx” are well within striking distance. “Polished Manx” appear to have the Silver Class well stitched up??

There is much to fight for for some and to be worried about by others over the last three races. The outcome of the two remaining qualifying races will be critical – 24th August Dun Laoghaire to Pwllheli and the 7th September James Eadie Race – Pwllheli to Dun Loaghaire. Between them is the ever popular Dun Laoghaire to M2 day race from Dun Laoghaire.

The trial use of the Predict Wind tracker was a great success. I will be in touch with Predict Wind to see how it can be further used in the promotion of offshore racing and ISORA.

Finally I would like to wish our ISORA boats that will take part in the Fastnet Race on Sunday 11th August a safe and successful race. They are “Mojito”, “Jedi”, “Lula Belle”, “Adelie”, “Aquelina”, “Desert Star”, “Ocean Tango” and “Polished Manx”. I am sure there will be mutual support shown by all ISORA boats in the preparation for and during the race. It is great to see so many ISORA boats taking part in such a race.

I hope to see you all back in Dun Laoghaire for the next race on the 24th August. The usual pre-race soiree will take place in the NYC on the 23rd August where at least one of the ISORA skippers that did the Fastnet Race will be showing off his new Rolex watch!!!!

RACE RESULTS: (Results are .htm files and will open in your Internet Browser)

Class results will be posted later.

After 8 Races - Using all races results, not just Qualifying Races:
After Race 8 Overall With All Races to count