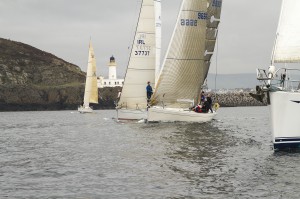 The third ISORA race in the 2013 offshore series was an experimental Sunday start allowing crews to deliver on Friday evening or Saturday morning. Weather conditions favoured a Friday night delivery with boats travelling from Ireland and Wales.

Many boats arrived in Douglas together for the Saturday morning opening of the bridge allowing access to the Marina basin and were greeted by Polished Manx’s Kuba who had been promoting an ISORA visit to the Isle of Man.

Breakfast in the Railway was a welcome start to the day and many commented on the breakfast on the shovel. The wet day allowed crews to prepare and plan their race strategies.

Saturday evening’s reception hosted by NCi (Sgrech’s Andrew Rosewarne) at the Bridge was a great success, the usual camaraderie and craic followed.

On Sunday morning breakfast was arranged by Kuba in the Douglas Yacht Club. All 17 competing yachts made the 0745hrs opening of the bridge and with time in hand before the start to realise the strength of tide on the start line between the DYC committee boat and the Douglas Lighthouse. The starting officers, Mike McMahon and Daren Barnes , got the fleet at the 0830 scheduled start time without a recall. The forecast was for light winds all day with a northerly airflow to follow later.

Soon after the start the fleet split into two distinct fleets with ‘Team Kingspan Raging Bull’ leading the pack to go south and Ruth and Pipe Dreamer opting to follow the example of local sailor Kuba on Polished Manx by taking a more northerly route.

Both fleets entered areas of no wind ‘holes’ but when a breeze did fill in the northerly fleet appeared to have made great gains. There was however still a long way to go! Mojito broke away from the southerly fleet staying high whilst Sgrech, Jedi and Lula Belle sank further south with their A sails.

When the wind 12 knots arrived at 0300hrs this swung to the NW and allowed the northern fleet to a speedy reach to the finish whilst the southern fleet remained on the wind.

The race finisher gave the bullet to Liam Shanahan’s ‘Ruth’ (J109) who also won Class 1 but this was not enough to get the overall first place slot which goes to Kuba on ‘Polished Manx’ who also takes first place in Class 2 and is the Silver Fleet winner. Well done Kuba for your race success and for organising a great reception in Douglas.

We are also delighted for Sarnia and Ocean Tango on Overall positions 2 and 3.

The next race is the Pwllheli to Wicklow on the 1st June. Our series sponsors, lynx metmAsts, are hosting a reception in PSC at 18.00 on the Friday evening, 31st May. The race Overall winner will also receive the perpetual lynx metmasts Trophy and a duplicate trophy to keep. This is always a great race and look forward to seeing you in PSC on Friday evening (and on the start line on Saturday morning).

Details of the race and the SI’s will be issued shortly.