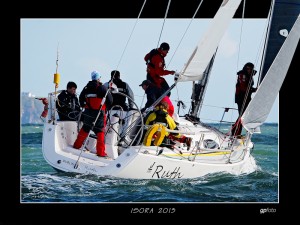 From an entry list of 22 boats 19 boats came the start line on Saturday in Dun Laoghaire for the first day race of the ISORA lynx metmAsts Offshore Series 2013 run in conjunction with the Royal Alfred Yacht Club’s Offshore Series.

As well as the “regular” ISORA boats there were many new faces and some faces we had not see for some time. Our double ISORA Offshore Champion Matt Davis with his reformed “Raging Bull” now called “Team Kingspan” was there after a whole season missing from the fleet. A new comer to the ISORA J109 family but by no means a new comer to ISORA is Liam Shanahan Jnr and his J109 “Ruth”. Liam sailed in ISORA for many years with his father Liam on “Emircedes”, “Lightening” and “Emer Herr”. It is great to have him back. “Mojito”, Peter Dunlop’s J109 from Pwllheli was there. Peter, although a regular ISORA sailor had changed “Midnight Mojito” for a J109. “Lady Rownea”, David Bolger’s Sadler 34 was there for the first time and I hope will race again.

The original course was the head south to round North Arklow. However, taking into account the recent strong northerly winds and exceptionally strong spring tides that could combine to produce “unpleasant” conditions over the banks, the Sailing Committee agreed to head north to Rockabill. The course was from the start to round Rockabill and back to the finish. Lambay Island was not a mark on the course. The weather forecast was for the winds to be 24k northerly at the start and drop to 3k in the afternoon!! North Arklow was never going to happen.

Commodore of the Royal Alfred YC, Barry MacNeaney sent the large fleet beating north with the strong tide towards Rockabill. The wind at the start was slightly less than forecast. The fleet split leaving the bay but the J109’s remained close to each other inshore. The leader was hard to call as there were many boats on the leading line heading north. A further split came just north of Howth when “Tsunami” tacked to go inside Lambay Island and get out of the lumpy seas. At that stage the winds were starting to slacken and before long boats were changing to the No1’s.

The fleet converged on Rochabill from both sides. “Team Kinspan” lead the attack from the east while “Tsunami” manoeuvred from the west. At this stage it became apparent that the tide had changed early and the fleet were punching into a strong tide with ever decreasing winds. “Team Kinspan” was the first to round Rockabill followed closely by “Mojito”. A procession of boats then rounded the rock and set sail for a very tight reach back to Dun Laoghaire. Fortunately the winds held long enough to get the fleet finished.

The leg from Rockabill, although with the tide, required constant trimming of sails to keep the boats going as fast as possible. As the winds decreased the J109’s came into their own but not sufficient to catch the Sigma 400 “Team Kingspan”. Matt Davis took line honours, and won the overall and class 1. Then three of the J109’s crossed the line in close procession “Jedi”, Andrew Sarratt was the first J109 over the line to take 2nd place Overall and Class 1. Next over with only 4 seconds between them were “Ruth” and “Mojito”. However, the ratings favoured “Mojito” who took 3rd place Overall and Class 1.

The après sail took place as usual in the National Yacht Club where many of the crews met and exchanged “pleasantries” while imbibing a glass of sherry!!!

It was encouraging to have such a fleet out so early in the season after such a poor winter where many boats had not the opportunity to get prepared. The next race takes place from Dun Laoghaire to Holyhead and is a traditional offshore. It is hoped that the numbers of boats taking part will remain strong as they prepare for the Dun Laoghaire to Dingle Race and the Fastnet race.

For photographs by GP Foto follow this link: GP Foto