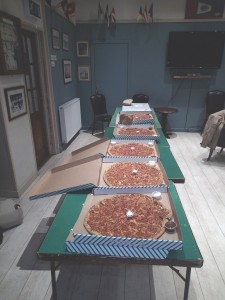 A slightly disappointing number of twelve boats left Pwllheli marina for the earlier start of 07.45 on Saturday 1st June for race four from Pwllheli to Wicklow. Thos that took part were again rewarded with great sailing conditions if not slightly frustrating at the end.

The previous evening the series Sponsor lynx metmAsts hosted a reception in PSC where the “lynx metmAsts Offshore Perpetual Trophy” for the race was on display. The usual great social activity the ISORA is famous for lasted well into the night and even into the early morning!!!

The forecast was giving 10-12 knots westerly / south westerly going very light in the afternoon and then veering north easterly in the evening. There appeared to be a differences in forecasts received by some competitors!! The agreed course for the race was direct to Wicklow.

The race was started at the Pwllheli SC Bridge by Richard Tudor in the forecast winds producing a fast reach towards St. Tudwal’s. J boats, “Ruth” and “Jetstream” were out of the blocks early and took a commanding lead from the start. Exiting the Tudwals sound the fleet hardened up to punch into the tide towards Bardsey. As Bardsey Island was not a mark on the course a decision was needed then as to what side to take the island against a strong south going tide.

“Raging Bull” was the first to head south outside the island while most of the fleet stayed close to the shore. The leaders “Ruth” and “Jetstream” did not get close enough to the north shore of Bardsey Sound and soon found themselves being pushed south across the sound by the tide. “Mojito” followed by “Sgrech” hugged the shore but “Mojito” tacked out too early and lost some of the advantage. Most of the fleet observing the advantage gained by “Sgrech” followed along and close to the north shore of the sound.

This was the stage that the accuracy of the forecast was critical. “Raging Bull”, “Ruth”, “Mojito” and “Jetstream” found themselves heading south on the beat to Wicklow. “Sgrech”, “Lula Belle”, Yachtzee” and “Predator” took the northerly tack. “Sgrech” was positioning itself for the North westerly wind that was due. Other forecasts spoke of the winds backing south!!!. Who was to be right???

Initially the tack south shot those boats far south with the tide. Very soon there was a significant split in the fleet. It looked that the south going boats had the advantage as the winds went light in the afternoon and rose again with no signs of the north westerly. South boats “Ruth”, Mojito” and “Jetstream” were powering into the finish when Wicklow struct back!!! Not only did the winds drop in the fast going south tide but veered north westerly.

“Ruth” managed to beat against the tide and get across the line but “Mojito” was pushed south past Wicklow Head before managing the get moving again. Similarly “Jetstream” had the beat north against the tide. “Sgrech”, noticing what was happening and who had been at that time desperately trying to get south after thinking the north westerly would never come, headed again north and managed to get infront of “Mojito” and Jetstream” to cross the line second. “Predator” and “Raging Bull” followed behind.

After the Class 1 boats struggled into Wicklow, the wind dropped even further causing grief for the Class 2 boats. “Ruth” was the first to cross the finish line at 19.18 while the last boat finished at 01.00. The finisher in Wicklow was President of WSC, Sadie Phelan.

The usual great welcome was received in Wicklow and it allowed the crews to chat about the race over a glass of sherry and a large slice of Pizza, compliments of Liam Shanahan “Ruth”.

The next race is the D2D race to Dingle on the 7th June. With the Series wide open this race could be a decider.

I have been informed by Ronan O’Siochru of Irish Offshore Sailing that with so many ISORA boats participating in the D2D and the Fastnet race, Irish offshore Sailing are running the following courses for any of those offshore yachts which may still need to get certification in order last minute. We have a few bookings for the first aid, and ISAF already and they are actually all ISORA crew members on the courses so far!

Their Yachtmaster Instructors, aided by volunteers of Yachtmasters, and coastal skippers are also standing by to deliver yachts to and from Cowes/ Plymouth and back from Dingle if required as well. He can be contacted at +353 85 7217835 or This email address is being protected from spambots. You need JavaScript enabled to view it.