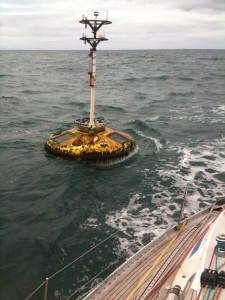 Of the 24 boats entered for the race, the 15 boats that came to the start line in Scottman’s Bay were rewarded with another spectacular days sailing from both a race and weather point of view. The weather forecast for the race was as had been predicted for some days previously, westerly at the start, backing south westerly. The wind strength at the start was 22-25k and dropped slightly to 10-12k when the fleet was at the M2 but increased again back to 22-25k for the finish. The tide had only just turned south against the progress of the fleet.

Despite the best efforts of the Race Committee to provide a beat, even using the “virtual” marks, it was not possible with the westerly winds while being mindful of getting the fleet to Holyhead. Instead they back to option of a more tactical race involving tight reaches against strong tides. The course selected on the day was as per the sailing instructions:

The testing conditions at the start line did not prevent Larry Power, Vice Commodore of the NYC from sending the fleet off towards the M2 on time at 08.00. Almost immediately there was a split in the fleet as they reached out of the bay, against the tide, towards M2. Only three boats managed to hold spinnakers at the start, “Sgrech”, “Mojito” and “Lula Belle”. The remainder of the fleet took a more northerly course to attempt to get a better wind angle to hoist their spinnakers. This ability to hold the kites gave the two “J boats” the edge. However, the hoisting of kites in those conditions was not without casualty – “Mojito” and “Lula Belle” will now require the assistance of a good sailmaker!!

The split in the fleet, those going north and those heading towards M2, caused concern on the reigning champion “Sgrech” as to why the other boats were taking such a northerly course. Very soon “Sgrech”, the only boat to uneventfully hold their kite were at front but at the extreme leeward side of the course.

Approaching M2 the winds became fickle and the usual “difficulties” of rounding M2 arose due to the strong tide. “Sgrech” rounded first followed by “Team Kingspan”. As the passage to M2 was fast, the tide was still going south when the first boat rounded. “Sgrech” took advantage of this and headed fast south to be in the best position for the approach into Holyhead in the following north going tide. The fleet followed a similar line.

On approaching Holyhead the winds increased, as forecast and backed to a more southerly direction causing spinnakers to be dropped and jibs to be hoisted. The approach into Holyhead had the usual tactical issues, making sure not to “plug” the strong tide at the North Stacks.

After a magnificent race conditions under sun and blue skies, “Sgrech”, Stephen Tudor, the reigning ISORA Champion crossed the line at 15:28 to take line honours, 1st Overall and 1st in Class 1. The ISORA Champion for 2011, “Team Kingspan”, Matt Davis, came next some 6 minutes behind to only take 3rd in Class 1 and 4th Overall. The other boats that “risked all” and hoisted their kites in Dublin Bay were rewarded when “Lula belle” took 2nd place Overall and 1st in Class 2 and “Mojito” took 3rd place Overall and 2nd in Class 1. The dark horse “Yahtzee” relished the conditions and snatched 2nd place Class 2 and 1st Overall in the Sliver Fleet – watch this boat!!! “Adelie” took 3rd place Class 2. “Windshift” took 2nd place Silver fleet while “Mistral of St Helier” took 3rd place in Silver Fleet. The last boat to cross the line did so at 17:35. The finish was provided by Dawn Russell of HSC.

The fast race under excellent conditions allowed the entire fleet to pull into Holyhead Sailing Club for a great social get together where the events of the day were exchanged between boats with great hilarity and mirth.

It was a great and rewarding days offshore racing followed by a superb social gathering that is a fundamental part of ISORA and those who race offshore.

The next event is the race from the IOM (Douglas) to Dun Laoghaire on Sunday 19th May. This promises to be another great race as ISORA has not been to the IOM for many years. A social event has been arranged on the Saturday night for all those taking part. More about this later.