Read a report in AFLOAT here
The Results are Published here

The last race of the 2016 Averycrest ISORA Offshore Series took place yesterday, 10th September. The race was the “LC Tyres James Eadie Race” from Pwllheli to Dun Laoghaire – 75 miles. This is a long standing race in the ISORA calendar. It was originally run from Abersoch to Dun Laoghaire.

What made this race special was that four boats, twice ISORA Champion Liam Shanahan’s “Ruth”, Peter Dunlop’s “Mojito”, Chris Power-Smith’s “Aurelia” and Stephen Tudor’s “Sgrech” all stood to win the overall championship with a good performance in the race.

Even in the past when starter numbers were low, this race attracted the best turnout. A week before the race 26 of the 34 entrants confirmed that they intended racing. However, as happened for the previous two years, bad weather for the deliveries wrecked the intended start numbers.

Despite the bad weather forecast for Irish boats delivering to Pwllheli before the race and UK boats returning to UK ports after the race, 14 boats came to the start line at the bridge at the old Pwllheli Sailing Club premises. Unfortunately “Ruth” had to pull out of the race at the last minute.

Strangely, with very bad weather forecast for the day before the race and the day after the race, the forecast for the start of the race was for little wind. There was to be fluky conditions in the morning with a south westerly winds filling in around mid-afternoon and building.

With such light winds and consideration for boats delivering back after the race, the course was selected to be from the start, direct to the finish with a short detour around the PSC 2 racing buoy close to the start. 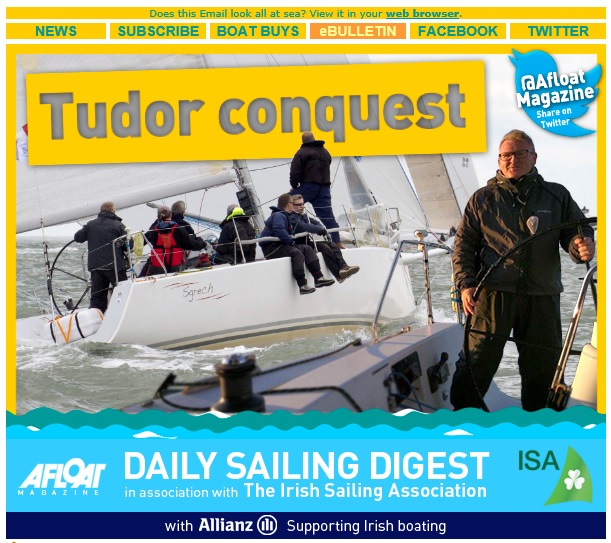 The wind at the start was 4-5 knots from the North giving a gentle reach to PSC 2. Andrew Hall’s “Jackknife” and “Aurelia” were the first to round followed closely by the other contenders, “Sgrech” and “Mojito”.

The next leg to Tudwal’s was a full run in the same light airs. Luckily the tide was help the fleet in that direction. It was obvious from the start the three remaining contenders were going to cover one another. “Aurelia” being a faster boat led the procession.

The fleet were tightly bunched as they passed through Tudwal’s Sound with “Aurelia” and “Jackknife” leading. Just as the lead boats had rounded the next headland before turning for Bardsey, the wind dropped and the entire fleet stopped. Fortuitously, the tide at that stage was still pushing the boast towards Badrsey.

Progress was slow and torturous. These conditions caused a split in the fleet and particularly the “contenders”. “Aurelia” and “Jackknife” broke first into a band of wind that took them off towards Bardsey Sound. After some time “Sgrech” slipped into the wind. Lastly “Mojito” and Ken Robert’s “Kerageous” got moving but not until “Sgrech” was over 3 miles ahead!!.

This would normally be “game, set and match”, but not at Bardsey!! The north going tide had just started to sluice through the Sound as the first boats arrived. Again it was “Jackknife” and “Aurelia” who blasted through the sound only to hit a hole of no wind on the other side. “Sgrech” joined them and waited for the rest of the fleet to gather.

This “gathering” allowed the contenders to group. With “Aurelia” over a mile ahead of “Sgrech” and Mojito over a mile behind, the south easterly wind started to fill. The final leg was a loose fetch to Dun Laoghaire in the last of the north going tide. Those boats blessed with “Code Zero” sails were able to fly them for the first part of his leg and they pulled away from the remainder of the fleet. Only when the wind picked up to over 20 knots were the “Code Zero” sails dropped and replaced with jibs.

At this stage the fleet had formed into a procession across the Irish Sea. “Jackknife” took line honours followed by “Aurelia”, “Sgrech”, “Kerageous” and Mojito. “Sgrech” took Overall and Class 1 while Mark Thompson’s “Aquaplane” took Class 2 and Silver Class.

All finish times were recorded by the Yellow Brick trackers and immediately uploaded onto the leader board on the YB app. The race can be reviewed on the YB app or on the ISORA website.

Going in to the race, “Sgrech” was leading the championship and this race win secured its position as ISORA Averycrest Offshore Champion for 2016. “Mojito” took 2nd place with “Aurelia” taking third. They achieved similar places in Class 1. In Class 2 was won by peter Hall’s “Adelie” with “Aquaplane” taking 2nd place and David Simpson’s “Albireo” taking 3rd. In Silver Class “Aquaplane” took 1st place ahead of Albireo” and John Keogh’s “Windshift”.

The race sponsor, LC Tyres, provided a separate prize for the Class 1 and Class 2 winners. These prizes and the trophies and prizes for all the ISORA race will be presented at the annual dinner to be held in the National Yacht Club on the 12th November.

The Results are Published here

Including Series Overall, All race results, Silver Class, Class 1 and Class 2 and also including the Club Team Results

The Notice of Race and Sailing Instructions will be published here soon ............